Craig Cheetham Oct 13, 2021 Craig Cheetham
Launched in 1980 as the Austin Mini-Metro, it was a critically important car for British Leyland and was hailed as the car that saved the company. This book looks in detail at the car s design, development and sales success from its initial design stage to the end of production in 1998, by which time it had evolved into the Rover 100- an astonishing eighteen-year production run. As well as looking at the cars in detail, the book also includes interviews with some of the key people involved in its design and development.The author covers the development of the Metro from the initial rough sketches in 1975 as well as the engineering developments. He also describes the launch of the car and its reception by the media and the public. By 1985 the Metro had a facelift and two extra doors, making it more competitive with European rivals. The book also covers the rebranding process as the company was reorganised under the Rover badge. A revised Metro was fitted with a new K series engine.The author describes the launch of the turbo-charged MG Metros as well as the GTA and GTi versions. The Metro s circuit racing successes are also included. The author also reveals some of the design ideas for a Metro replacement that never made it to production.Including advice for both current and prospective Metro owners and what to look out for, this book is a gold mine of information about one of Britain s most significant car models. 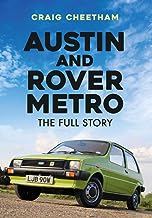